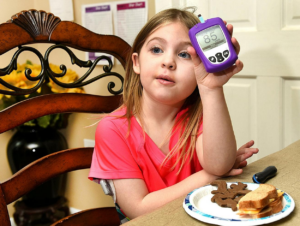 Three Bucks County moms of kids with Type 1 diabetes have created a nonprofit to help other families dealing with the disease.

Sarah Moore is a busy girl.

On Sundays, she swims; Mondays, she goes to dance; Thursdays, she has hip-hop class. She plays basketball and soccer, depending on the season. She goes to kindergarten during the week, and she’s learning to play guitar.

But every day, multiple times a day — even in the middle of the night — the 6-year-old New Britain Township girl, with help from her family members, has to check her blood glucose level to make sure it’s within a safe range.

Sarah, who was diagnosed with Type 1 diabetes at 19 months old, now wears an insulin pump. The pump provides a steady amount of insulin around the clock through a tiny needle inserted under the skin. It calculates how much of the hormone she needs based on her blood glucose and how many carbs she eats.

She also wears a continuous glucose monitor, a small patch on her upper arm that measures her level every few minutes and helps her mom and other family members keep track of her level using a smartphone app. Their alarms sound if it goes above or below set numbers.

After each had a son diagnosed with Type 1 diabetes in 2014, the Doylestown-area moms began fundraising for research and a cure. In 2016, they formed a nonprofit called the Type One Parent Project (TOPP) Foundation, with the goal of providing emotional support and guidance for Bucks and Montgomery County families like Sarah’s, and raise awareness of the disease.

Type 1 diabetes is an autoimmune disease that stops the pancreas from producing insulin, which regulates blood glucose, or sugar, and allows the body to use it for energy.

Low blood glucose can lead to seizures, coma and even death, while high blood glucose, if untreated, can cause damage to nerves and organs, according to the JDRF, formerly called the Juvenile Diabetes Research Foundation.

Type 1 is commonly associated with kids — hence the former name juvenile diabetes — but people can be diagnosed at any age. According to JDRF, 1.25 million Americans are living with the disease, including about 200,000 under age 20. The prevalence in that age group is on the rise as well — there was a 21 percent increase between 2001 and 2009.

There is no cure for Type 1, and people cannot prevent or manage it with a healthy diet and exercise, like some can with Type 2 diabetes. Experts aren’t totally sure what triggers the autoimmune response that causes it, but Ken Rodenheiser, a registered nurse and certified diabetes educator in the Diabetes Center at Children’s Hospital of Philadelphia, explains to patients that the gene is always there.

“It’s like an app on your phone that you never use. And then once that app opens up, you can never close it,” he said.

Symptoms of the disease include frequent urination, fatigue, extreme hunger and thirst, and weight loss. But sometimes they go unnoticed or are attributed to another illness, increased activity or growth spurts.

Sarah, and McCleary’s son, Gage, then 9, both developed an emergency condition called diabetic ketoacidosis, in which their blood glucose levels were extremely high and their bodies were breaking down fat for energy, releasing harmful chemicals called ketones.

Gunsiorowski’s son Ryan, then 14, and Curro’s son, Reagan, then 12, also were sent to CHOP with extremely high blood glucose levels.

The hospital has a specially trained team of doctors, nurse practitioners, dieticians, social workers, nurses and others who work with kids and their families for several days after the initial diagnosis as their blood glucose levels are brought under control.

“We put them through diabetes boot camp,” Rodenheiser explained.

It can be overwhelming, McCleary said.

“Everybody says when you’re first diagnosed, ‘This is going to be your new normal,’ ” she said, adding that it takes about a year to really understand what that means.

There are lots of adjustments, including financial. Kids with Type 1 diabetes are eligible for Medicaid benefits in Pennsylvania regardless of income and even if their families have insurance, but it’s still an expensive disease. Sarah’s insulin pump cost $7,000, for example, so Moore is thankful it was covered.

During that first year, kids and families return to the hospital several times and meet with certified diabetes educators like Rodenheiser to make sure they feel confident managing the disease and have a plan for how to do it.

Meeting other moms whose families were going through the same things helped Gunsiorowski “immensely,” so the support aspect of TOPP is a big priority for her.

The group plans to expand its list of speakers and programs at monthly meetings this year, and they’re developing a mentoring program in which older kids and teens with Type 1 can help younger ones.

Next month, TOPP will award several scholarships to families with a financial need so their kids can go to the American Diabetes Association’s Camp Freedom in Schwenksville, Montgomery County. The kids get medical attention and the experience of a week-long overnight camp — something that might not be possible otherwise.

“It kind of normalizes diabetes so (the kids) feel a sense of ‘I’m not alone,’” Rodenheiser said. “You focus on being a kid before you focus on diabetes and blood sugars. That’s also very helpful with coping and for the parent when they see their kid able to manage and feel comfortable.”

Even sleepovers at friends’ houses can be frightening for parents of kids with Type 1, Moore added. But she and the other moms stress that Type 1 doesn’t hold their kids back, and with all the technology and tools being developed, she is optimistic about a cure.

″(Sarah) can live life to the fullest and she will. She’ll live a life like any other kid,” Moore said, adding that she thinks the cure will comes before Sarah goes to college. “There is no difference between her and (her 8-year-old sister) Rachel. There’s no difference between her and the kid on the other side of the street. She’s got that one thing but every kid has that one thing.”